It’s Friday and I have a new progress report on Reynard! In this devlog, I’ve merged a couple of videos and thoughts from my archive.

Because Reynard can move in multiple directions and we’re using only 4 directions to visually show where he’s going, it was really hard to aim with his ranged attack. That’s the reason why I’ve created an “aim assistance system”. I know… it sounds way cooler than a “pointing arrow”.

I’ve spent some time working on a weapon system… Weapons will be able to slow down, stun or knock back enemies. Each weapon will have different stats and will consume different amount of stamina.

Because there are no great RPGs without loot dropping pots, I’ve added loot drops. Now these “normal” pots can drop hearts that can heal Reynard.

Remember that in previous post I’ve mentioned that I was working on a stamina and health system? Well… they are now connected with UI and working. Currently they are displayed as pink and green bars. We still didn’t decide if we want to leave them like that. Maybe in the end we’ll use numbers instead.

I was working on treasure chests… Reynard can interact with them and swap weapons. The idea is that Reynard will only be able to carry a single melee and a single ranged weapon.

I’ve spent decent amount of time working on AI. You won’t see a huge progress in this video, but let’s say that we have a simple slime (bluegreenish) that randomly roams around the level. A slime (red) that can follow the player but if player hides behind an obstacle it just keeps on moving… and a slime (green) with pathfinding system.

I’ve gathered the courage to work on Reynard’s looks. So here he is… our first version of Reynard the fox: 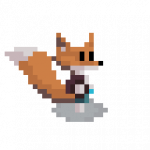 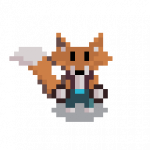 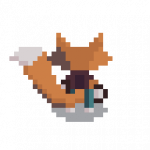 I’m kind of satisfied with his side profile, but there’s something that bothers me on his front side. I’m always surprised how much time and effort has to go into pixel art… Specially in animations… Pixel art is something that I really want to get better at and this definitely isn’t the final version of him, so don’t be scared! Video time:

If you have any suggestions, comments or thoughts… Please let me know in the comments section down below.