Colors and tilesets in a “cyberpunk” game

In the past week, I was mainly focusing on color scheme and tilesets.

Because we are aiming for cyberpunk color scheme, I have selected colors that can be combined to bring out that ‘neon’ shine with which we want to stand out.

Working with that kind of color scheme (very light and shiny), made me realize, that it will be hard to merge them all together. To much neon shine is exhausting for the eyes, to little and we lose the main aspect of our game design.

In the last days I was also facing another problem – using to much colors in one item. My new rule for the pixel art from now on is ‘less is more’. I have already applied this rule and the new color scheme to the ground tilesets.

My first selection ground tileset was too realistic, it contained very complex shapes and not so vibrant colors. It was great but not the tileset we are looking for “Pariah” game. I completely changed my design, simplified it and applied the new color scheme.

Tileset is almost complete, but I am still thinking of using gradients in the future. 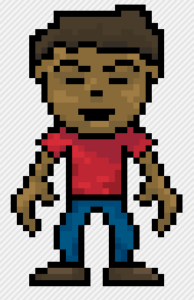